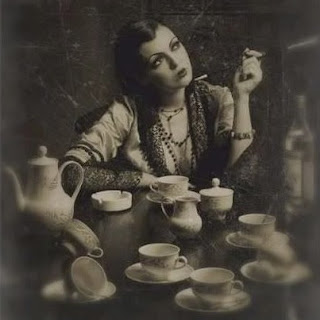 I had my tea leaves read once in Salem, Massachusetts. I think I was in high school. I don’t remember anything about the reading I received. I know I didn’t leave thinking I had experienced either a revelation or a fraud. Just $20 worth of entertainment and a nice cup of tea.

For those who don’t know about the act of tea leaf reading, or tasseography as it is formally known, it’s a style of fortune-telling that interprets the patterns left in the bottom of a cup by remnant bits of tea leaf. The same could be done in a cup of wine, coffee, or any beverage which might leave behind a trace of its former self. Those residual contents offer patterns that may be interpreted using a combination of traditional meanings and the reader’s own intuition.

My grandmother always advised us to trust our intuition. And I certainly believe in it. I also believe in the existence of psychic phenomena. I don’t, however, believe it exists everywhere it is reported as such. This means to say that some tea leaf readers I would imagine are exceptionally gifted, just as there are those who are not. Noting the small but persistent percentage of those who are actively seeking to swindle, most are not crooks, they’re just sitting on various points along the wide spectrum of talent. Most may not give you any news of value, but they’re mainly harmless. Some, however, could change your life.

My faith includes a belief that we all have intuition. I get the sense that most of us feel that way. Having a gut feeling and following it is part of mainstream culture. But still, we don’t give it very much stock because while we recognize it likely exists as a reality of human existence, we simply don’t know how to process the implications.

Let’s then consider the implications of having an intuition. Where does it come from? Do you believe that some people have a stronger intuition than others? Have you ever had a gut feeling and it proved to be correct? Even once?

I would bet that the vast majority of us could be described by the above. So much so that we might be audacious enough to consider it an established fact that humans possess the ability of intuition, of knowing something without benefit of any of our five recognized senses. We each of us have a sixth sense. A belief in even one experience of having an accurate gut feeling reveals that you may agree.

So now what? Much of traditional religion would have you be extremely cautious about the origin of the inner voice you hear. Unless that voice agrees with them and their doctrine, it could only be from the devil. Better not listen to it. Better to listen to them only.

But religious professionals are better kept in the lane of advisers than authorities. If your inner voice is speaking in favor of the teachings of love and unity, then its origins are irrelevant.

Traditional religion has put quite a bit of shoulder into the effort of demonizing the practice of tasseography and other modes of divination. Tarot cards, runes, palm reading, have been tarred with a brush they haven’t deserved. All because church leaders preferred that they alone be the sole arbiters of our experience with the divine. And sadly, it often had less to do with the saving of our souls than it did about the acquisition of our funds.

So if we believe in the existence of human intuition, and we consciously decide that a religious body does not have the sole authority to dictate to us what is and isn’t good in the world, is there a way we might now explore that idea? Isn’t this all just another form of prayer? I would argue that if there are physics to prayer, then it would be the same physics as that of divination.

Are you curious about the things you might learn if you were to explore forms of divination like astrology, playing cards, or tea leaves? Which form might one choose? Should we learn to practice it ourselves, or should we seek recommendations for reputable readers? How should we go about it?

The answer is: Follow your intuition. What forms of divination are you attracted to? I personally always liked the Tarot, but there are too many things to memorize, so for me, it wasn’t a good fit for personal practice. I was attracted to numerology early on. It can be simplified to nine basic meanings, one for each of the single digits 1-9, but can be understood as far more complex with greater study. And numbers are simply everywhere.

Which language does the Universe speak? It’s either all of them or none of them, right? So let’s make a leap of faith that the answer is all of them.

I guess the question isn’t so much, though, about what language Source uses to speak to us as it is what language shall we choose to listen to It. I think God will speak to us in any format we select. But we do need to pick at least one.

The principal criterion of a good form of divination is that there should be a degree of randomness which prevents us from placing too much bias on the answer to the question we are asking. It should also have a glossary of traditional meanings but still leave room for the use of intuition. You are also free to create your own from scratch. But dig deeply into your intuition to create it.

We will better hear the strumming of the cosmos if we pick a language and study it. Learn its definitions and traditions. Find groups who practice it and let your intuition guide you towards those who have integrity. Learn to speak it with ease and fluency.

My faith believes that love is always being propelled at us from the Universe in the form of subconscious inspirations, ideas, comforts, and advice. There is always water behind that faucet. We just have to choose a method to turn it on and be one with it. We need to practice listening and get great at it. We are encouraged to find ease and rest in the presence of our intuition. It is the voice of our divine spark.

Our intuition is a gift. Allow that small quiet voice inside of you to grow. Be in support of its development, in yourself and others. There will always be a benefit to greater listening.