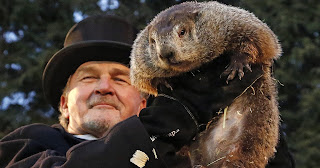 First it was a bear, in Europe, before they became scarce. Then it was a badger. Although even before the bear, it was people. Once arriving in the United States, it became a groundhog.
This is the genealogy of the harbingers of spring.
Groundhog Day here in the US, occurring annually on February 2, is a tradition which began, according to legend, in Punxsutawney, Pennsylvania in the late 19th century by the Pennsylvania Dutch following their emigration from the German-speaking regions of Europe.
Its purpose is as much meteorological as it is divinitory. We want to know how much longer the winter will last. We want the groundhog to tell us by the shadow it does, or does not, cast as it ritually emerges from its “hibernation.” A shadow means six more weeks of winter. No shadow means an early spring. I've always thought it ironic, under the circumstances, that a sunny day portends a longer winter. Shouldn’t it be the other way around? Nonetheless...
Groundhog Day, though not at all a religious observance, coincides with the Catholic and Lutheran festival of Candlemas which honors Jesus’ first presentation at the temple following his birth and the end of his mother’s postpartum confinement. Candles are lit and blessed during the mass in recognition of the expanding light which has entered the world.
The feast of Candlemas, and the likely reason it has the name Candlemas in the first place, is because of its ancient pagan roots in the Gaelic celebration of Imbolc. Although, of course, Imbolc has even further ancient roots of its own.
Traditionally occurring on February 1, Imbolc marks the halfway point between the winter solstice and the spring equinox. It is a ritual of candle-lighting. It is a time for reflection and renewal. It is for the healing of old wounds and the waking of things long sleeping, both literal and figurative. It marks the passing of the old ways into the new, refreshed.
There are also other candle-based traditions in February as well such as the Catholic Blessing of the Throats, which is performed with two candles intersecting to form a cross on February 3. In the Unitarian Universalist tradition, the celebration of Luminescence on the third Sunday in February has gained in popularity across the country since its introduction in 2007. There are many others as well.
Throughout history, candles were lit to chase away evil spirits, cure disease, and ward off death—something the winter knows all too well. We know today that sunlight is a natural disinfectant. Which may cause us to wonder whether the cart was before the horse all along in earlier humans’ recognition that light had properties which science only now recognizes. What might be learned from that?
February also includes with it every manner of light-oriented symbols and rites, across cultures, going back to ancient Roman times, and likely before. These varied traditions were meant to instill hope, foster purification, and instill readiness for the coming spring.
So why does this matter? Because it points to something which is intrinsically human: the need to remind ourselves that Winter will end and the Spring will come. It is our entry into a phase of anticipation which heightens the emotional and physiological value of the thing we anticipate, once it arrives.
We eagerly anticipate the spring, the process of which raises the level of its emotional and physiological value to us. The coming warmth encourages us and bolsters our flagging confidence in surviving the remainder of winter. We examine our shrinking stores of food, the remainders of last year‘s harvest, and take heart that they may just be enough to get us through. Hold on.
Today we may not fear the final phases of winter quite as much. Or perhaps amid the bustle of our busy lives we forget to notice that we fear this time of year. The rate of disease and death is always higher around this time. The long winter has taken its toll on our hearts as well as our loved ones. If there’s one thing we need right now, it’s encouragement. All shall be well.
In the 21st-century, we have not shed our humanity. We have not evolved beyond the point of feeling reflexive discomfort as the winter grinds on. Add to that the complications of our modern world, and perhaps we need rituals of comfort and renewal even more now than in ancient times.
The advice here is to actively seek that comfort, even if you don’t consciously feel you need it. If you are human, this time of year will affect you in one way or another. Modern terminology coins it as seasonal affect disorder, but that’s only a scientific equivalency to our own long history with winter. Heed it.
Turn your face to the light whenever you can. Close your eyes and turn toward a sunny window and feel the light penetrating you. Light a candle and take note of its warmth. Go to a Catholic church and witness the ritual of Candlemas. Seek out neopagan groups who hold public rituals of Imbolc. Search for light at this time. You need it more than you know.
Posted by Wil Darcangelo, M.Div. at 12:00 AM