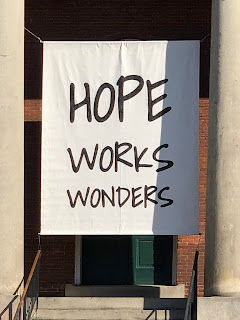 What is the function of hope? What does it do for us or to us? I feel pretty sure we take the concept for granted. And of course I had a general understanding of the reasons for maintaining a hopeful attitude as I began writing this message. But I started with the question: What is the function of hope? Because I didn’t know.
I wondered if it was the same thing as optimism, but by a different name. I googled: “the difference between optimism and hope.” I think you should do the same. In particular, read an article in Psychology Today by Dr. Utpal Dholaka.
I found hope and optimism are quite distinct from one another. There’s definitely something to be pondered in the dynamics of their very unique partnership, hope and optimism. They co-inform one another toward achievement. They each have only one operational directive and it is the same: Face forward.
Where they differ is in the nature of how each concept is perceived and used. Hope is the emotional state of believing in a desired outcome even knowing the odds are, or might be, against it. Optimism includes with it some degree of confidence that a plan will work out should all the pieces fall into place. It is with optimism that a plan, begun in hope, becomes more concrete. Still not a guarantee, but more possible. Optimism is fueled by hope. But it is also shown the way by it. Hope is the flashlight in the dark.
Hope is the attitude we employ when continuing to cheer on a football team which rarely wins. Hope gives us permission to not know how it could possibly happen in the way we want. It’s associated with religion in that hope makes an assumption that there is more occurring behind the than we are aware. It’s the question mark variable.
But from a state of hope―and possibly only from it―do we begin to sense and eventually notice possible pathways toward achieving a goal. Hope is what keeps the door open.
Perhaps it really is effective to think of it as turning on a flashlight in the dark. Especially in a space so much larger than the throw of your light, just light shining out into nothingness. Looking for something, a needle in a haystack, without any sense of direction, no clear pathway forward, just a desire and an unwillingness to believe against the impossible.
Without hope the flashlight just sits there. Not even turned on. And the possibilities which may exist somewhere in the dark will lie undiscovered. At least until things get so bad that only hope remains. That’s one thing we have always managed to count on. When things are at their worst, hope still remains.
We may not see it in ourselves until pressed. We might consider ourselves to be “realists.” Which, by the way, is seldom a word I hear used by people who actively go about manifesting their desires. Optimists do that.
Many of us have a challenging relationship with hope because we might naturally just have a dark view of life and humanity. Some take a view like that of Friedrich Nietsche who said, “Hope in reality is the worst of all evils because it prolongs the torments of man.”  Don’t be so emo.
I want to believe that hope is something we can choose for ourselves. And maybe that’s why people who believe in a higher power have a tendency to live longer lives. Not because “God is rewarding them for their faith.” But because faith just happens to be one of the ways to allow for the existence of a question mark in the equation of hope. Faith is one of the ways hope can exist simultaneously with a rational mind. But only one of them.
Hope can also be derived through a belief in chance, or superstition. Crossing your fingers, not shaving your beard or changing your socks until the playoffs are over, are clear demonstrations of hope which have nothing to do with a higher power as we usually define it. But the hope is still there. That hope keeps them coming back to the same stadium each year believing that the impossible may happen this time.
Which now makes me think that, yes, we can choose hope. Because there’s so many different ways by which we can imagine a variable we don’t yet have the ability to predict. It’s built into the phrases: “Anything can happen,” “It’s not over till it’s over,” and “ It’ll all be good in the end. If it’s not good, it’s not the end.” That last one is my favorite.
We do our best to train ourselves to think in this way. Recommendations of hope are visible practically anywhere you look. Little encouragements, even amid the blood and doom in our media, which help us to believe that there is an answer to the great question mark of our equation, if only we choose not to lose hope in its existence.
From only hope comes optimism. And optimism is how things are achieved in this world. So attend to your hope. Join with the collective hopes of humanity for a safer, more peaceful world. Align your hopes with the greater good and keep your eyes peeled for the pathways which will reveal themselves as a result of it.
Turn that flashlight on, no matter how dark it is. Everything will be okay. Above all things, I have hope. 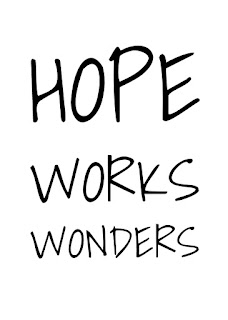